Daley Blind should have been revelling in being on the winning end of the Netherland's thrilling 3-2 opener against Ukraine, but the Dutchman's mind was on much bigger things - bigger than football - playing just a day after his mate, Christian Eriksen, collapsed during the Denmark vs Finland game. 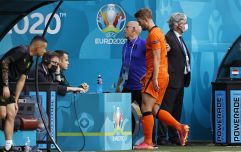 Dutch crash out to Czech Republic after disastrous 25-second spell

END_OF_DOCUMENT_TOKEN_TO_BE_REPLACED

The 31-year-old left the pitch in tears following his country's first game of Euro 2020 as teammates and staff consoled the defender who had clearly been affected by Saturday's incident. When speaking after the game, he was visibly emotional but did well to get through an understandably tough interview.

Translated into English, Blind is quoted as saying: "Yesterday had a huge impact on me. Besides the fact that I know Christian well as a friend, the situation for him is terrible. Of course, I have also experienced a few things in that area, so that I had to overcome a mental hurdle to play.

"I had a lot of trouble with it, but I'm proud that I did it. Then all the emotion comes out for a while. I've definitely thought about not taking part. The images and the moment had a lot of impact and I didn't sleep very well because of them. I really had to overcome a big hurdle to do this."

If you remember, Blind had collapsed himself twice in the space of a single year during the 2019/2020 season: once in December 2019, after being diagnosed with heart muscle inflammation during a Champions League tie against Valencia, then again in August 2020, collapsing in a pre-season friendly against Hertha Berlin. Scary stuff.

The former United man was, thankfully, okay but was subsequently fitted with a life-saving electronic device called an implantable cardioverter-defibrillator (ICD). Not only does it monitor a person's heartbeat but it can also emit electrical pulses to fix an abnormal heart rhythm.

Blind was ultimately subbed off in the 64th minute as it was already a heroic effort to even make the decision to step on the pitch and head coach, Frank de Boer, no doubt wanted to be cautious as well as respectful. One can only imagine the kind of nerves you would have playing. Some mentality.

Eriksen has since been confirmed to be stable and in good spirits, with the 29-year-old Dane issuing his first public statement since the incident, saying: "Thank you, I won't give up. I feel better now - but I want to understand what's happened [...] I want to say thank you all for what you did for me."

Moments like this serve as a reminder that there are much more important things in life than football and, just as importantly, how incredible the medical staff, officials and players were in acting so quickly following his collapse. Anyone could take home this year's trophy but these guys that are the real winners - no question about it.

popular
New video of Wayne Rooney on night of ‘stitch up’ pics emerges
Conor McGregor deletes disgusting tweet about Khabib's dead father
Man who claims he’s Charles and Camilla’s child is now using his son as ‘proof’
Police find 48TB of 'mostly adult' material in Shilpa Shetty's home after husband's arrest
Filipino Olympic weightlifter will be given $660,000 and 2 houses for winning country's first gold
Men should ejaculate at least 21 times a month, according to study
Eddie Hall's monstrous 500kg deadlift had some horrific-sounding consequences
You may also like
News
At least 21 dead and dozens missing as floods rip through Germany
Sport
Netherlands prepared to walk-off if racially abused at Euros
Football
Plane flies over England training ground with banner warning about most Croatia goals coming down the left
Sport
Euro 2020 Quiz: Group C
Sport
Matthijs De Ligt says he's chosen not to have coronavirus vaccine
Next Page