No pyro, no party, as the saying goes.

Despite being the inferior of the two European club competitions, the Europa League is a very difficult competition to win. The Thursday-Sunday schedule and lots of travelling to stadiums with hostile atmosphere sub-standard pitches can throw up a lot of potential banana skins.

The hostile atmospheres are often all over Europe but particularly in the east of the continent. The threat of crowd trouble is never far away, this afternoon's fixture between Red Star Belgrade and CSKA Moscow showed that. The match finished 0-0 but the crowd were not bored by any stretch of the imagination.

The CSKA ultras made sure their presence was known with a flare show at the ground. The smoke coming from the flares was so thick impaired the view of those watching on TV. The referee was forced to delay the start of the second half as a result. 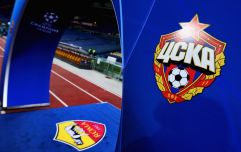 END_OF_DOCUMENT_TOKEN_TO_BE_REPLACED

You might be wondering why a Europa League tie was played on a Tuesday instead of a Thursday. The reason is health and safety related; Red Star's neighbours Partizan are playing at home on Thursday and you won't be surprised to hear that the two fanbases don't exactly get along.