The League Cup has a brand new name this season.

After the competition went without a sponsor last season, it was announced back in April that next season's competition will be known as the Carabao Cup. 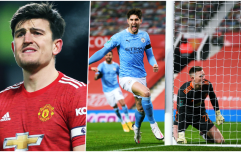 END_OF_DOCUMENT_TOKEN_TO_BE_REPLACED

Carabao, for those of you not already aware, are a Thai energy drink company, and decided to mark their first season as the sponsors of the competition by doing something special: holding the first round draw in Bangkok.

Now, following the completion of the draw, there are certainly plenty of people talking about it. Unfortunately, however, it's for all the wrong reasons.

As the graphic below shows, it seemed Charlton Athletic had been drawn away to Exeter City. Nothing too strange about that, you might think... until you realise the Addicks had also been drawn to play Cheltenham Town at home in the very same round.

Downplaying the Cup? Try telling Shrewsbury there shouldn't be replays

END_OF_DOCUMENT_TOKEN_TO_BE_REPLACED

The draw had been live streamed from Bangkok, but a problem with audio meant that those watching had to rely on on-screen graphics for updates.

It's since been confirmed that Oxford United were actually drawn to play Cheltenham, meaning Charlton do indeed have to travel to Exeter City.