Celtic have been fined by Uefa for their supporters flying Palestine flags in a Champions League play off match against Hapoel Be'er Sheva.

The Bhoys will be forced to pay €10,000 for what the governing body have ruled to be an 'illicit banner' in breach of Article 16 (2) of the UEFA Disciplinary Regulations. 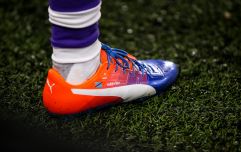 END_OF_DOCUMENT_TOKEN_TO_BE_REPLACED

Celtic have been fined for illicit banners on several occasions in the past, including for this exact offence - the flying of Palestinian flags - during a meeting with Icelandic team KR Reykjavik back in 2014.

And the fans' actions have seemingly been regarded as contravening Uefa's rules on political statements of any kind.

The amount of the fine - which converts to just over £8,600, is a drop in the ocean compared to the figure raised by the club's supporters for Palestinian causes.

A crowdfunding page has been established, initially with a target of £15,000, with the goal of matching any fine and donating the amount to the people of Palestine.

After far surpassing all targets the amount raised sits at just over £172,000 at the time of writing, with a new target of £188,000 set to mark the formation of Celtic Football Club in 1888.

'We launched this appeal in the hope of raising £15,000 to provide basic medical supplies to conflict-hit Gaza and some football kit to enable the young people of Aida refugee camp in the West Bank to start up a team,' a statement on the GoFundMe page reads.

'Instead, the amazing generosity of Celtic fans (and many others, including some who have now adopted our club as their own) means that the original target (and many others) have been smashed and that this appeal will not only save lives but change them.'