When Carlos Tevez left Juventus, a return to boyhood club Boca Juniors was the only thing on his mind.

And the love for the Argentinian club clearly runs in the Tevez family, as the former Premier League star's son Lito Jr demonstrates here. 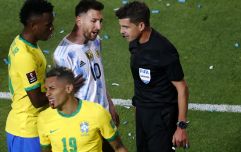 Otamendi violently elbows Raphinha before hurling him up from the ground

END_OF_DOCUMENT_TOKEN_TO_BE_REPLACED

In one of the monumental struggles every parent faces, Tevez was trying to get his son to change clothes with some difficulty.

But when you're wearing the home shirt of the club you love, why wouldn't you react like this...

Hopefully if Lito Jr ever has a football career, he'll be introduced to the concept of shirt-swapping early on.