Carlos Tevez spoke like a man for whom money couldn't buy happiness when he referred to Boca Juniors in 2015.

"My whole family and I are Boca fans and I want to play in that shirt once again," Tevez said before his move from Juventus to the Argentine side.

"I've been in Europe for many years and I need my family. I miss my father, my mother and my brother. I can't complain as everyone has treated me well, but my mentality is Argentine and my desire is to go back to Buenos Aires."

END_OF_DOCUMENT_TOKEN_TO_BE_REPLACED

It was the chance to play-out his days for the club he loved, in front of adoring fans and surrounded by his friends and family.

Then the Chinese Super League came calling, and well... 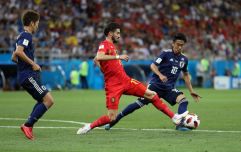 END_OF_DOCUMENT_TOKEN_TO_BE_REPLACED

However, it's hard to be too judgmental about Tevez leaving behind his hometown club for the riches on offer in Asia. He's about to become the highest-paid footballer in the world.

In fact, he's about to become the highest-paid footballer in the history of the sport.

That works out at more than £33m per year. After tax.

It's happening.
Tevez is joining Chinese league for 40m€ per year, becoming the best paid player in the history.

Tevez re-joined Boca in July 2015, and is a regarded as a hero by fans of the Buenos Aires club.

On Sunday night at La Bombonera, Boca's fans pleaded with the club's number 10 to stay and turn down the astronomical wages on offer in China.

Tevez scored in the 4-1 win against Colon and was substituted in the final minute to a rapturous round of applause from the crowd.

One Boca fan even ran on the pitch and hugged Tevez as he left the pitch, begging him to stay and/or thanking him for his service to the club.