The Republic of Ireland assistant manager said earlier this week that Hector Moreno's tackle on Luke Shaw, that resulted in the Manchester United defender suffering a double leg fracture, was "brilliant." 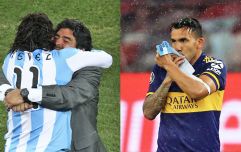 END_OF_DOCUMENT_TOKEN_TO_BE_REPLACED

Former Premier League referee Howard Webb also defended the PSV defender's tackle. However, we doubt either men would be able to defend another leg breaking challenge that occurred this week.

In fact, even Carlos Tevez's mother wouldn't be able to defend her son's actions.

The former United, City and Juventus forward, currently playing for Boca Juniors in his native Argentina, went into a challenge with his studs showing, and broke his opponent's leg.

Argentinos Juniors midfielder Ezequiel Ham appeared to have his shin snapped in two, and looked in horrific pain as he lay cleaned out on the turf.

This tackle isn't for the squeamish, and doesn't make pleasant viewing if you've just eaten.

Amazingly Tevez, who had already received a booking, remained on the pitch.

WARNING: Video shows the challenge and the resulting injury