Brazilian Ronaldo might have ballooned, but just watch this sublime finish (Video)

If you needed any proof that age (and to an extent, weight) is just a number, you've only got to look at Ronaldo.

He might not be the streamline athlete that saw him become one of the world's most feared strikers in the 90s, but boy he's still got that magic. 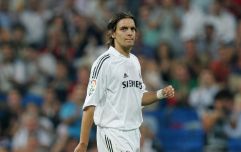 END_OF_DOCUMENT_TOKEN_TO_BE_REPLACED

Yes he's carrying a few extra pounds - but don't let that fool you, like it did this hapless defender.

The man's still got the predatory instinct like a panther and a turn of pace like a whippet, as he showed here.

He burns the defender with a lovely move, then buries the ball in the back of the net. It never left him.