Have to admit, we weren't expecting to him there

The BBC have announced their punditry line up for the 2018 FIFA World Cup and have done so in a rather novel way, by essentially borrowing from all the best and worst transfer announcements video ever. 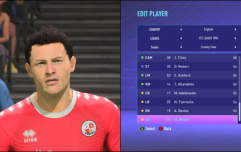 END_OF_DOCUMENT_TOKEN_TO_BE_REPLACED

While the BBC's attempt doesn't have quite the same impact as those of Besiktas or Roma, they have announced a pretty impressive and surprising team of pundits, with the main draw undoubtedly being Chelsea legend Didier Drogba.

The 40-year-old is currently banging in absolutely pingers of goals for American side Phoenix Rising after leaving MLS side Montreal Impact in 2016, and his appearance is certainly something of a coup for the BBC.

The BBC's World Cup coverage starts on June 14 and you can watch the video below.

popular
Ava White, 12, dies after Liverpool stabbing - four boys aged 13 to 15 arrested on suspicion of murder
Tobey Maguire Spider-Man spotted in No Way Home merchandise
Over 200 kilos of cocaine with Liverpool FC branding seized
The JOE Friday Pub Quiz: Week 271
A definitive ranking of every swear word from worst to best
Pro Volleyballer spends £590K believing he was dating supermodel Alessandra Ambrosio for 15 years
Here's how to see who's been taking screenshots of your Instagram Stories
You may also like
Entertainment
I'm A Celebrity's Richard Madeley rushed to hospital after falling ill
Entertainment
New series Hellbound has knocked Squid Game off Netflix top spot
Entertainment
I'm A Celeb viewers all have same complaint during 75 minute show
Entertainment
I'm A Celeb hit with same complaint from viewers minutes after first episode started
Entertainment
Adele breaks down during emotional reunion with old teacher
Next Page