Commentators on Spanish television called it a "massacre." And that was on the stroke of half-time, at 4-1. As it turned out, massacre was putting it lightly. By the end of the game, the scoreline had doubled.

Bayern Munich tore Barcelona limb from limb, put them in a meat grinder and disposed of the remains with minimal effort in a match that will go down in history as the nadir of a lamentable period for Barça. It was a game on par with Germany's 7-1 drubbing of Brazil in 2014. And the worst thing is, Bayern Munich barely got out of second gear.

Thomas Müller opened the scoring after three minutes with a goal that epitomises the player who become Bayern's most capped in this competition, both clinical, clever, and scruffy. Advantage Bayern. Alarm bells well and truly ringing for Barça.

Barcelona were offered a lifeline soon after, as Bayern's high line was exposed with a ball over the top to Jordi Alba, whose bouncing cross was sliced past Manuel Neuer by David Alaba. The Austrian let out a wry smile, almost as if he knew it wouldn't matter in the end. And it didn't.

Bayern were soon back on the front foot. Ivan Perisic made it 2-1 with a drilled shot across goal. Serge Gnabry made it three after escaping the grasp of Clement Lenglet to latch onto a deftly chipped pass from Leon Gortezka and volleying past a helpless Marc-Andre Ter-Stegen. And Müller made it four, again getting the better of Lenglet to poke Joshua Kimmich's cross home at the near post. Robert Lewandowski, with 53 goals to his name this season ahead of tonight's game, had hardly been involved. He hadn't needed to be.

Barcelona's sluggishness was exposed. Year after year of misguided, expensive signings cruelly thrown back in the face of the club whose identity on the pitch carries equal weight to their results. It was a damning indictment even before the game that Barça's three most expensive signings ever were all on the bench - the most expensive of whom, Philippe Coutinho, was on Bayern's bench.

END_OF_DOCUMENT_TOKEN_TO_BE_REPLACED

Antoine Griezmann was brought on at half-time for Sergi Roberto, an open admission from Quique Setién that his cautious team selection had backfired spectacularly. But his deployment on the left of a four man midfield failed to make a dent in the game.

Seven minutes into the second half, Lewandowski had the ball in the net, but it was ruled offside. No bother, there would be plenty more chances to come.

Barcelona pulled another goal back on 56 minutes, with the most Barcelona of Barcelona moves. Messi picks the ball up deep, much deeper than he should need to come, floats a pass to Alba in behind, who cuts it back to Suarez, who sent Jerome Boateng the wrong way and finished with his weak foot.

Was there suddenly a game on? Maybe?

No. This time it was Kimmich's turn to get his name on the scoresheet but all the work was done by Alphonso 'Roadrunner' Davies. The Canadian teenager glided past Nelson Semedo as if he wasn't there and wondered into the box unchallenged, Barcelona's defence paralysed with fear. A square ball gave Kimmich the easiest finish he is ever chance he is ever likely to get. 5-2.

Kingsley Coman replaced Perisic and would have scored with his first touch if it weren't for a miraculous block from Alba. Again, Barcelona's dithering in possession deep in their own half left them millimetres away from being punished.

Setién looked to his bench in hope more than optimism and on came 17-year-old Ansu Fati who replaced Busquets. Out with the old, in with the new, a mantra the club with have to embrace more in near future.

Messi came deeper and deeper, with three other attackers on the pitch, to dictate play. He was inevitably surrounded and kicked every time he got the ball. But as always, he did not react. What would be the point? 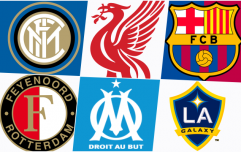 QUIZ: You have 30 seconds to answer this one tricky football question

END_OF_DOCUMENT_TOKEN_TO_BE_REPLACED

Not even he, the greatest player to ever walk the earth, could halt the forces at play.

Lewandowski had the ball in the net again on 82 minutes, heading in a cross at the far post. A VAR check concluded he was onside, and Lewandowski had his 54th goal of the season. 6-2.

Now the record books were re-opened.

The last time Barcelona conceded six goals was in 1994 in a 6-3 away defeat to Real Zaragoza. But at least they won the league that season. There is no such trophy to soften the blow this time.

And the icing sugar on the cherry on the icing on the seven-tiered cake for Bayern was of course a goal from Barcelona loanee Philippe Coutinho. No celebration, of course. Understandably too, in what must have been a bitter sweet moment for the Brazilian. Soon he will have to return to Cataluña, like a child returning to a dysfunctional home after a fun time away at camp.

The last time Barcelona conceded seven goals in one game was 1949, against Valencia, when football was basically a different sport.

"This is embarrassing," said Steve McManaman. You don't say.

This result will lead to some brutally honest conversations at Barcelona HQ. Quique Setién's days are numbered, if he even gets another 24 hours. The prospect of Lionel Messi leaving is now suddenly very real, as the man who has dragged a dysfunctional side through the past few years in the face of internal factional warfare evaluates how he wants to spend his last few years in the game.

Rudderless, lethargic, woeful. There aren't enough adjectives in the dictionary to describe how bad Barcelona were on the night. This was the worst night in the history of one of Europe's great clubs.

As for Bayern, it will only reinforce their belief that they are the best team in the tournament. They demonstrated what a modern club at the peak of its powers looks like. The polar opposite to Barça. Intense off the ball, devastating on it. Comfortable in possession, ruthless in front of goal. A joy to behold.

Barring a miracle from Lyon on Saturday, they will meet Manchester City in the semi-finals and they will quite rightly fancy themselves to lift the trophy for the first time since 2013.