Athletic Bilbao's lovely gesture will tug at your heart-strings until every last one snaps.

When the Athletic Bilbao squad photo gets taken for the upcoming season, there might be a distinct lack of hair. That is because their players have done something wonderful in support of their young teammate Yeray Alvarez. 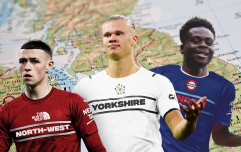 END_OF_DOCUMENT_TOKEN_TO_BE_REPLACED

The 22-year-old midfielder was first treated for testicular cancer in December 2016. Last month, he was forced to withdraw from the Spanish u-21 squad after suffering a relapse.

Following the original diagnosis, he had a testicle removed, but during a routine post-op medical test, the doctors concluded that he required chemotherapy.

Alvarez has undergone the treatment for the first time this week and to show their support, the entire Bilbao squad have shaved off their hair.

What a beautiful sight.

Alvarez was said to be doing "very well" following his first round of chemo, according to Bilbao's medical chief, Dr Joxean Lekue. It is predicted that he will return to training in a few months.