Dana White has revealed that Artem Lobov will not be spending the rest of fight week in the UFC's designated host hotel after concerns were raised following an incident with Khabib Nurmagomedov.

Both fighters are set to compete on the UFC 223 card this weekend but an aggressive exchange between the pair earlier this week resulted in some threatening phonecalls being made to Lobov.

The confrontation is believed to have revolved around Conor McGregor, who is a training partner of Lobov's but one of Nurmagomedov's fiercest rivals.

McGregor will no longer be the UFC lightweight champion following Saturday's main event between the undefeated Russian and Max Holloway.


Nurmagomedov would not provide any information about the altercation with Lobov when questioned at Wednesday's press conference in Brooklyn but it's clear that he was none too pleased with his fellow Russian. 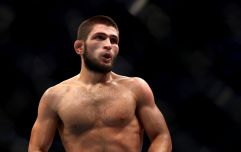 Khabib wants fighters to start doing more with their money

END_OF_DOCUMENT_TOKEN_TO_BE_REPLACED

'The Eagle' has plenty of support in New York and UFC President Dana White suggested that the decision was made to move Lobov to a different hotel for his own safety.

Speaking to SportsCentre, White said: "I did see [the video]. It got bad. Apparently after that thing got out, Artem was getting phonecalls and all kinds of things so he had to move to another hotel.

"I don't know what the situation is with those guys but I'm going to talk to Khabib about it."

Lobov is set to face Alex Caceres on the preliminary card of UFC 223 while Nurmagomedov can move to 26-0 if he passes the test provided by Holloway, who has agreed to replace the injured Tony Ferguson on less than a week's notice.