Arsenal deleted a Will Grigg tweet and offer an apology

The Will Grigg situation may be getting out of hand.

The Northern Ireland and Wigan Athletic striker has obtained cult status due to the song coined in his honour - "Will Grigg's on fire", a reworking of "Desire", a dance track from 1996.

END_OF_DOCUMENT_TOKEN_TO_BE_REPLACED

Grigg didn't see a minute of action in the group stages of Euro 2016, but is arguably Northern Ireland's most famous player. Mats Hummels was even asked if the German defence was terrified, because Will Grigg is on fire.

Arsenal's Twitter account also looked to get in on the Will Grigg 'banter', and tweeted this before the game between Northern Ireland and Germany, looking to capitalise on the Will Grigg phenomenon to showcase Mesut Ozil's highlights from last season. 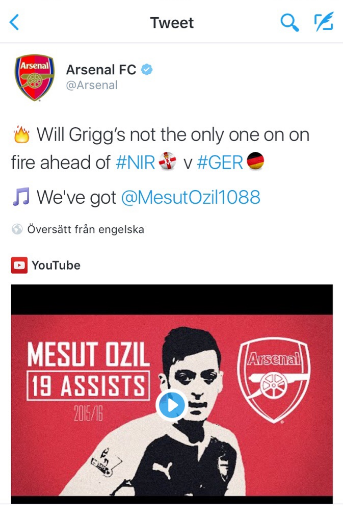 Harmless stuff, but it didn't go well. So much so the tweet was deleted, and Arsenal offered something of an apology in their next tweet.

😅 Fair enough, we got a bit carried away there - #deleted. Here's the best of @MesutOzil1088 from last season https://t.co/CxxffQxYdn

@Arsenal @MesutOzil1088 skippers, you just got bullied into deleting a tweet. This is not an elite mentality.

It turns out people on social media are difficult to please, who knew?