Andy Murray only won his second Olympic gold medal a week ago, but now he's already into another tournament final.

While the sporting festivities continued in Rio, Murray was making his way through to the latter stages of the Cincinnati Masters.

END_OF_DOCUMENT_TOKEN_TO_BE_REPLACED

In what was a re-match of the Wimbledon final, Murray beat Canadian Milos Raonic 6-3, 6-3 in their semi final clash.

The match may have been straight-forward enough for the Scot, but he was almost in hot water with the umpire after he kicked a stray ball and it shot past the official's head with just inches to spare.

The ATP rulebook states: "Players shall not violently, dangerously or with anger hit, kick or throw a tennis ball while on the grounds of the tournament site except in the reasonable pursuit of a point during a match".

The umpire's pointed look at Murray showed he was not impressed, but he did not impose a penalty on the Scot.

The win is Murray's 22nd win on the bounce, an amazing run that is the longest winning streak of his career.

"If you're a bit lower on confidence, regardless of how fresh you are, if you haven't played loads of matches you make bad decisions in those moments," Murray said. 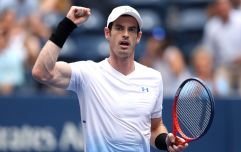 END_OF_DOCUMENT_TOKEN_TO_BE_REPLACED

"Because I've won a lot the last few months, that's something that has been good, especially this week for sure.

"I've needed it to be because I haven't been feeling perfect. I've managed to get through the matches pretty well."