He didn't want to be missing out on all the football

The football world has come together over the past 48 hours, since word emerged of Alex Ferguson's emergency procedure at a Salford hospital following his brain haemorrhage, to offer their support and prayers to a man who has dedicated his life to the game.

END_OF_DOCUMENT_TOKEN_TO_BE_REPLACED

On Saturday evening, Manchester United announced that their former, long-time manager had suffered the haemorrhage. 'The procedure has gone very well,' they stated, 'but he needs a period of intensive care to aid his recovery. His family request privacy in this matter.'

That request has been widely followed and it has been left to the men that played for and against him, as well as managers and football fans, to pay their own dues.

In an interview with MUTV, Michael Carrick said:

"I was devastated. I got a text on Saturday evening and I couldn’t quite believe it. It didn’t really sink in. I was just devastated....

"It was a tough night on Saturday and we were waiting for some positive news. We were all praying for him and thinking of him, Cathy and the family. It’s a tough time for everyone but I’m thinking positive and hoping he will pull through." 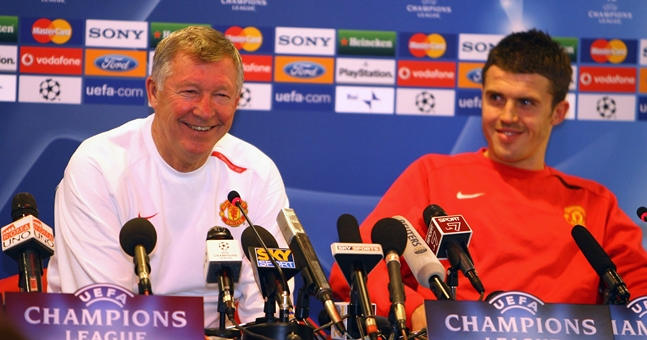 END_OF_DOCUMENT_TOKEN_TO_BE_REPLACED

There has now been that positive update and it will come as a great relief to so many.

The Daily Mail is reporting that the Scot is awake and talking to family members. 'While there was no official update on his condition yesterday', writes James Tozer, 'friends said he had been ‘sitting up talking and asking about his results’ two days after emergency brain surgery.'

Having lived and breathed football for the past seven decades, it is heartening to hear Ferguson is still battling away and wondering about his own results.

popular
Chilling moment man with knife and balaclava is captured wandering around family's living room
Lisa Kudrow hits back at fans complaining about lack of diversity in Friends
Landlord faces £40k fine after tenant puts swimming pool on roof of flats
James May 'hospitalised after crashing into wall at 75mph filming new show'
Ex-porn star Lisa Ann tells virgin, 46, with micro penis that 'size doesn't matter'
Furious Reading and Leeds ticketholders demand refunds as band replaces Rage Against The Machine
Ex-teacher who got pregnant by former student plans to film birth so it can be taught in schools
You may also like
Sport
Man United 'relaxed' about PSG's pursuit of Marcus Rashford
Sport
Michael Knighton hits out at critics after launching Man United takeover attempt
Sport
Adrien Rabiot's mother has put Man Utd move at risk of collapse
Sport
Gary Neville's Manchester Utd transfer rant in 2014 proves nothing has changed in recent years
Sport
Man United target two new forwards as desperate search for a striker goes on
Next Page