More importantly though, The Brand With The Three Stripes have brought out a new pair of football boots to celebrate their anniversary. The iconic Copa Mundial - widely regarded as the loveliest of all football boots ever made (don't @ us) - has been given a modern makeover and the result is this, the limited edition COPA70...

adidas have used PrimeKnit for the upper part of the boot, while the studs on its white outsole are capped with red. Its inside is lined with leather, too, which is nice. To be honest though, you're probably not that arsed about such details, are you? Why would you be when the boot is so, so easy on the eye? 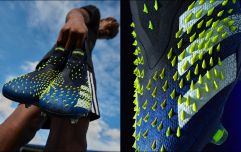 END_OF_DOCUMENT_TOKEN_TO_BE_REPLACED

Frankly, we see no reason why it shouldn't be perfectly acceptable to wear these boots away from the football field in any other everyday life situations, but should that be an issue, there's more good news. Along with the boot, adidas have also brought out a trainer, too.

The boot will set you back €250, with the trainer €150 from adidas. Better get saving those pennies quickly.

popular
Hedge fund requires bailout after Reddit users cause 800% increase in GameStop shares
A definitive ranking of every swear word from worst to best
Group fronted by Darron Gibson favourites to buy Wigan Athletic
QUIZ: Guess the football stadium from the photo
UEFA determined to play Euro 2020 across 12 nations despite pandemic
Premier League admit offside mistake for Man City goal
QUIZ: Identify which of these 50 players played with Cristiano Ronaldo
You may also like
Sport
Adidas bring back iconic 1998 Predator with Accelerator 'Eternal Class' boot
Sport
Kaka calls out Sunday league player who told him to 'cut it back'
Sport
adidas to launch incredible 'hand drawn' kits including Arsenal and Man United
Sport
Wolves unveil interesting new Portugal third kit
Quiz
QUIZ: Do you know the names of these classic trainers?
Next Page