Anne, Princess Royal as the biggest 'rugby nause' in the royal family. There you have it.

Mike Tindall and Zara Phillips Tindall joined Alex Payne on JOE UK's House of Rugby and were great value as they discussed how they met, supporting each other in their various sporting pursuits and on who the biggest 'rugby nause' in the royal family is.

One of Tindall's best rugby memories, he says, was in 2011 when he was England captain for a Calcutta Cup game against Scotland. Princess Anne, Zara's mother, is a patron of the Scottish Rugby Union and was in royal attendance at the game.

"I was injured [in the game] and I ripped the deltoid ligament, on the inside of my ankle, off the bone. Pulled a bit of bone off there, too. It was bad.

"But I was like, 'No mate, that's my mother-in-law. There is no way you are taking it. This is going to be a moment I'm going to actually savour!'"

Tindall said there were two members of the royal family who he would rate as the biggest nauses when it comes to rugby. When it comes to the technicalities and tactics around the game, his mother-in-law Princess Anne gets the nod. He commented:

"In terms of nause when it comes to when they [Wales] win, well, [it's] William. Every time Wales win, like obviously the other weekend when they bet England, he's straight on the phone to me.

"And I was like, 'I've still got lots of pictures of you in our changing rooms with your England jersey on!'"

Tindall added, "That picture of [Princes] William and Harry when they both became heads of the [English and Welsh unions] and they were both sat next to each other [in their England and Wales jerseys] is the best one ever."


Princes William and Harry are respective royal patrons on the WRU and RFU. 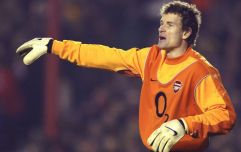 END_OF_DOCUMENT_TOKEN_TO_BE_REPLACED

Asked by Payne if Prince William is now a "passionate Welsh fan", Zara Phillips Tindall replied, "Well, he has to be!"

"When Wales play England," Mike Tindall helpfully said, "he has to have his Welsh jersey on but, I think, he would support England as well."

So many loyalties to keep track of. That is why, we reckon, Prince William much prefers supporting the British & Irish Lions.

The full version of the show can be watched here:

Episode 21 sees Alex Payne joined by Mike Tindall and Zara Phillips to discuss London 2012, the biggest royal rugby nause and the upcoming fourth round of the 2019 Guinness Six Nations.

You may also like
Life
You could earn £20 an hour teaching English as a Foreign Language online from home
Life
Fiverr: DIY indoor sports with professional commentary
Sponsored
THE JOE FRIDAY PUB QUIZ: WEEK 175
Sport
Confidence in football and why strikers feed on it
Sport
Moyes at West Ham, football's weirdest transfers and 2020 predictions
Next Page