Voter writes 'w*nk' all over ballot paper, puts 'not w*nk' next to Greens, deemed acceptable as a vote

Details have emerged of one ballot paper from last week's European elections that probably sums up a lot of the electorate's feelings on British right now. 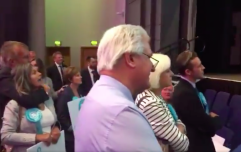 END_OF_DOCUMENT_TOKEN_TO_BE_REPLACED

According to the Guardian's results liveblog, a disputed ballot in Leicester was found that had the word 'wank' written next to every candidate - apart from the Green Party representative, next to which was written 'not wank'.

Chris Williams, an agent for the Green party in the region, told the Guardian that the ballot was finally deemed an acceptable vote for the party.

Williams also told the newspaper that he had seen multiple ballots spoiled with pro-Brexit slogans. He said he had seen messages like  ‘Brexit now’, ‘We need brexit’ and ‘We’ve already voted on this’ - however, these voters had not actually voted for either UKIP or the Brexit Party, and the ballots were not counted.

In an election that saw both major parties take large hits, the UK Green Party had a strong showing, receiving over two million votes and more than doubling their number of MEPs, from three to seven. They even beat the Conservatives to fifth place overall.

Their success was reflected with similar wins for Greens across Europe.

popular
Brit on holiday beaten with a brick by gang before being thrown in the sea unconscious
Rishi Sunak has resigned as Chancellor of the Exchequer
Sajid Javid: Health secretary resigns amid Chris Pincher scandal
Premier League player arrested on suspicion of rape facing two more allegations
Towie’s Yazmin Oukhellou and Jake McLean had ‘furious row in Turkish club’ minutes before horror crash, report claims
Lurpak spotted on sale for £9.35 in supermarkets - with security tags on packs
Dad who ran off with Ukrainian refugee says couple are doing 'brilliantly' - but he can't see his kids
You may also like
News
The UK is fucked
Politics
SNP MEP absolutely eviscerates Brexit party during Sky News interview
News
Jeremy Corbyn: EU membership 'will have to go back to the people'
News
Tommy Robinson laughed out of the North West as results declared
News
SNP walking to victory in Scotland's European elections
Next Page