North Korean Supreme Leader Kim Jong Un has warned that North Korea is running out of food. In addition, reports indicate that the prices of everyday goods are increasing to the point ordinary citizens cannot afford them.

Typhoons last year had created enormous food shortages, which has now resulted in grain shortages that the state refers to as a "tense" situation.

The Supreme Leader met with President Trump in 2019/Via Getty

END_OF_DOCUMENT_TOKEN_TO_BE_REPLACED

A Seoul based news outlet, NK news, reports that in the nation's capital, Pyongyang, 1kg of bananas is now for $45. This would mean one banana would cost $6.90. For comparison, in the UK, the average price for 1kg of bananas is 0.79p.

The BBC reports that because of closing borders, international trade has plummeted for North Korea. China usually supplies the country with fuel, fertiliser, and food.

South Korea's Yonhap News Agency reported that North Korea is down 1.35million tonnes of food this year. This is quite the opposite of what Kim promised when he became leader, where he promised that there would be meat on every table.

Kim is scrambling to cover his back, pointing to the global pandemic as the cause and not his own hubris. But, unfortunately, the people have no choice but to believe him. With little access to international information and state-run media dominating the news cycle, the general public has few options. 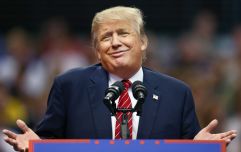 END_OF_DOCUMENT_TOKEN_TO_BE_REPLACED

North Korea's closed borders have meant aid organisations have had to pull out of the country, leaving the people with only Kim to look out for them. Considering around 3 million North Koreans have previously starved to death, the future is not optimistic.

popular
Runner finishes last in 400m race as penis keeps falling out of shorts
Teacher's sex abuse sentence delayed after she gives birth
Massive piece of Elon Musk's spacecraft lands on farmer's property and could make him very rich
Inbetweeners star Joe Thomas has been in a relationship with his co-star for over 10 years
Tourists left 'squealing' as thousands of venomous crabs invade UK beach
NASA scientist's desperate plea before being arrested
Woman almost died during sex when orgasm popped aorta
You may also like
News
Scientist have been able to pinpoint where covid-19 actually came from
News
Man, 27, says he couldn't find work to support his family because he looks like a child
Entertainment
Noel Gallagher is banned from China for life after being branded an 'enemy of the people'
News
Chinese zookeepers forced to defend lion's haircut - insist they did not give it 'bangs'
Life
Secret sinkhole in China reveals ancient hidden forest with possible 'new species', scientist say
Next Page