MP steps down after 'peeing into coffee cup' during Zoom meeting

Would you believe it's the second time in just a matter of weeks that he's exposed himself during a governmental Zoom meeting?

A Canadian MP has said that he will be "stepping aside temporarily to seek assistance" after his colleagues saw him urinating during a virtual House of Commons meeting.

END_OF_DOCUMENT_TOKEN_TO_BE_REPLACED

William Amos reportedly relieved himself into a coffee cup, making it the second time in just a few weeks that he has been involved in an embarrassing incident like this. During a call in April, Amos stripped naked after returning from a run.

The member of Canadian Parliament insists that both incidents were accidental and that he is "deeply embarrassed."

According to the MailOnline, Amos said: "While accidental and not visible to the public, this was completely unacceptable, and I apologize unreservedly.

"I will be stepping aside temporarily from my roles as Parliamentary Secretary and from my committee duties so that I can seek assistance."

The father of two didn't go into any further details about the type of help he is looking to get or how long he will be stepping away from his political duties for. 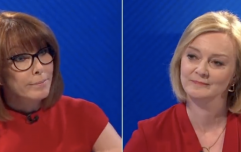 END_OF_DOCUMENT_TOKEN_TO_BE_REPLACED

Unlike his first flashing incident though, no footage has emerged of this particular embarrassment. However two Canadian reporters tweeted on Friday morning that they had confirmed with sources that Amos peed into a cup.

I mean, we've all had our struggles with Zoom over the year or so. But come on mate. Flashing twice on camera in the space of a few weeks? How has he not yet worked out how to turn his camera off?!

popular
Tourists left 'squealing' as thousands of venomous crabs invade UK beach
Rishi Sunak wants to crack down on degrees that don’t make students rich
Asda slammed for 'embarrassing poorer families' with new product redesign
Boris and Carrie put south London home on the market for £1,600,000
Runner finishes last in 400m race as penis keeps falling out of shorts
Massive piece of Elon Musk's spacecraft lands on farmer's property and could make him very rich
Delivery of new Leeds United shirts delayed after shipping containers were plunged into the sea
You may also like
Life
Cowboy left writhing in pain when trying period pain simulator while woman on her period has no reaction
Entertainment
Pink Floyd's Roger Waters declares 'I'm far, far, far more important' than Drake and The Weeknd
Life
Terrifying video shows screaming construction worker dangling from crane hundreds of feet in the air
Entertainment
Radio station plays 'Killing in the Name' non-stop from 6am after multiple staff get fired
Life
Man, 20, in constant pain plans to die by assisted suicide after heartbreaking ‘goodbye’ barbecue
Next Page