Joe Biden emitting his own emissions it would seem...

The Duchess of Cornwall was apparently left stunned after US president Joe Biden broke wind in front of her at COP26.

END_OF_DOCUMENT_TOKEN_TO_BE_REPLACED

According to sources, Camilla has been unable to talk about anything else after hearing President Biden fart whilst they chatted to each other at the climate summit in Glasgow.

A source told the Daily Mail: "It was long and loud and impossible to ignore.

"Camilla hasn't stopped talking about it."

The President met Camilla during a reception at the Kelvingrove Art Gallery last week, which was also attended by Prince Charles, the Duke and Duchess of Cambridge and Prime Minister Boris Johnson. 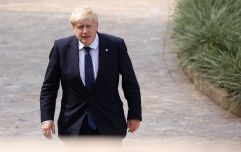 'The game is up', Chief Whip tells Prime Minister

END_OF_DOCUMENT_TOKEN_TO_BE_REPLACED

Probably not the way that Biden would have liked to mark the one year anniversary of his 2020 presidential victory over Donald Trump.

This isn't the first embarrassing moment for the President during his trip to Glasgow, either.

First his motorcade was stopped by a "large, naked Scottish man" stood in the road...

From the White House pool report on @POTUS journey from Edinburgh to Glasgow:
‘At one point when we were still on smaller country roads, a large, naked  Scottish man stood  in his front window taking a picture of the motorcade with his phone.’
Welcome to Scotland, Mr President

... and then he faced accusations of falling asleep during the opening speeches of COP26.

An unfortunate metaphor for the Biden presidency 😴 😴 😴 pic.twitter.com/KTpMK6dKvA

This also isn't the first time that the 78-year-old has faced accusations of letting rip in front of people.

In May 2020, Republicans, including Donald Trump Jr, posted a video clip of Biden containing a suspicious noise while live-streaming an exchange with Pennsylvania Governor Tom Wolf.