Ahh, elitism at its finest, eh?

Boris Johnson is reported as stating that children of wealthy parents have access to private tutoring "because of their parents' hard work" while speaking in the Commons today.

The Prime Minister was addressing the House during the PMQs, during which he faced criticism and questioning from opposition leader Kier Starmer over issues such as education, the foreign aid budget and the uncertain June 21 'end of lockdown'.

Keir Starmer says that the prime minister should take the lead in providing a global vaccine rollout. #PMQs pic.twitter.com/H8jN47zqK3

Sir Keir broached the notion that children are potentially "losing out" on a substantial education because ministers simply haven't put enough cash into the school system, saying that the current state of schooling "will hold back kids for a generation".

When Starmer pushed the PM on the disparity between working and upper to middle class education and being generally "all over the place" when it comes to education, here is how the Bullingdon Boy chose to respond.

PM: "The kids of well-off parents - thanks to their hard work - have been able to rely on private tutoring. What the government is now doing is coming in on the side of all the other kids who don't get access to that tutoring." 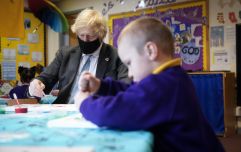 END_OF_DOCUMENT_TOKEN_TO_BE_REPLACED

The number 10 spokesperson has come out to suggest that the Prime Minister did not mean to imply other parents do not work hard to provide for their kids but that he was "simply making clear that he wants to make sure that this is available to all children who need the extra tuition, and that's why we set out the [education] package that we set out last week".

Conversely, Starmer's equivalent argued that the statement only further highlights how "out of touch" he and the current administration are.

In this case, unlike Boris, we're not so ready to whip out lazy, Latinate locutions and proclaim 'luck is what happens when preparation meets opportunity': there's plenty of people all around this country that we dare say are working just as if not ten times harder than the average Conservative crony.

We've seen some pretty telling instances of chumocracy even just today, with a High Court ruling that both Dominic Cummings and Michael Gove acted unlawfully in handing out government contracts to their pals. However, given the current climate the UK and the rest of us regular folk around the world are in, this is a bit rich even for us—pardon the pun.

popular
FootballJOE’s Badge Quiz – The International Edition
Roy Keane shows impeccable comic timing when asked about England's Covid breach
QUIZ: Every Euro Championship goalscorer this century
Fan invades pitch with rainbow flag before Germany vs Hungary
FootballJOE Photoshop Challenge #2: Martin Dubravka's calamitous own goal
Sex expert says these are the four words you should always say in bed
UK Government urges children to sing bizarre 'One Britain One Nation' song on June 25
You may also like
Coronavirus
Chinese disease expert says US should be investigated as origin of Covid
News
Downing St responds to leaked Boris 'f**king hopeless' Hancock text
News
'Freedom Day' has been delayed by 4 weeks, PM confirms
Sport
Priti Patel says fans have right to boo England team for taking the knee
Life
Legal age you can get married to be raised in England and Wales
Next Page