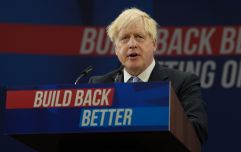 END_OF_DOCUMENT_TOKEN_TO_BE_REPLACED

Christopher Geidt, the independent adviser assigned to investigate Boris Johnson's refurbishing of his flat has ruled that although he acted "unwisely" and was responsible for a "significant failing” while securing the funds for the renovation, there was no standout evidence to suggest that he breached ministerial code while doing so. Right...

Geidt released the findings from the inquiry into the five-figure revamp of the PM's No. 11 Downing Street flat, in addition to an examination other ministerial interests. The report itself was supposed to be released in December of 2020. Timely as ever.

Johnson is thought to have secured investment not only from the Conservative party but from one benefactor, in particular, Lord David Brownlow - a former vice-chair of the Tories. Geidt said that he was "content" with these findings and "that no conflict (or reasonably perceived conflict) arises as a result of these interests.”

Lord Brownlow's donation was not deemed to accompany any additional obligation and the inquiry found that there was “no evidence” to suggest he “acted with anything other than altruistic and philanthropic motives”. Chumocracy strikes again.

Furthermore, it was judged that Johnson was apparently unaware of Brownlow's generosity, with the report stating that he was not "aware either of the existence of these invoices or how they were settled”.

However, Geidt did say that the plans for a trust to finance the PM’s share of maintenance and refurbishment were “not subjected to a scheme of rigorous project management by officials” and to that extent, he considers a level of ministerial failure, insisting that the PM was happy for the apartment to be refurbished regardless of "how this would be funded.”

Prime ministers typically have access to up £30,000 worth of taxpayer money to remodel their homes, however, it was thought Boris Johnson tried to upgrade this system when he took office in 2019. As such, his revamp was significantly more expensive and is now expected to pay £60,000 for the work.

popular
Man Utd fan produced hilarious live reaction to Rashford and Vardy goals
Shocking footage shows moment man is killed by his own brothers
Addison Rae banned from TikTok
Fans praise Chris Evans for being honest about his mental health
WATCH: Goalkeeper shown red card for attacking teammate after goal
Sir David Amess: Suspect named as police hold him under Terrorism Act
Cole Palmer plays for Man City against Burnley, then bags hat-trick for U23s
You may also like
News
Dominic Cummings claims the UK government always intended to 'ditch' the Northern Ireland protocol
News
Dominic Cummings calls PM a 'joke' over Coronavirus handling
Politics
All the times Boris Johnson holidayed during a national crisis
News
The 9 scummiest moments from the Tory and Labour conferences
News
Work and Pensions Secretary sings 'I've had the time of my life' on eve of historic benefit cuts
Next Page