"It was the wrong content that has gone out."

A Youtuber has been arrested after making a video of him tying his pet dog to balloons and sending it floating into the air. 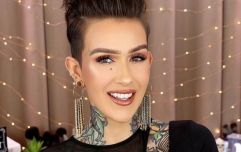 END_OF_DOCUMENT_TOKEN_TO_BE_REPLACED

Indian YouTuber Guarav - who has four million subscribers - was detained after attaching his pet dog 'Dollar' to hydrogen balloons.

Footage shows the poor pooch being sent flying into the air soon colliding with a balcony.

Gaurav, 31, shows little remorse and is seen laughing at the dog's expense.

He was detained under sections 188, 269, 34 of the Animal Cruelty Act and caused widespread outrage with his actions on May 21.

People for Animals, one of India’s largest animal welfare organisations, had raised concerns after seeing the cruel footage.

The vlogger has 4.15 million subscribers on his YouTube channel.

Delhi | YouTuber Gaurav Sharma arrested for cruelty to an animal after he posted a video on social media where he floated up a pet dog in the air by tying hydrogen balloons on its back, risking its life: DCP South Atul Thakur 'The Simpsons: Hit & Run' has been remade by one guy in a week

END_OF_DOCUMENT_TOKEN_TO_BE_REPLACED

Atul Thakur, Deputy Commissioner of Police (DCP) for south Delhi said Gaurav has been detained after risking an animal's life by filming a video.

"He has been arrested on the charges of animal cruelty by risking pert dog’s life via video making," he said.

Gaurav had apologised and said he'd taken all the precautionary measures before sending the pet pooch into the air.

"I admit my mistake, but I personally had taken all the safety measures before flying the video," he said.

popular
16-year-old mows down team of cyclists after trying to blow exhaust fumes on them
Why Inter Milan had to remove snake from away kit for Champions League tie
Katie Price rushed to hospital after 'drink-drive crash'
Police mock motorists who spent three hours queuing for petrol station that was closed
Salt Bae customers disgusted at price of steak in his London restaurant
Brian Laundrie's parents call 911 on Dog the Bounty Hunter as he finds fresh campsite
Barca receive £1.2bn offer from Dubai company to write off club debt
You may also like
Life
Guy quits $100,000 a year job to work for Logan Paul and then gets rejected
Sport
Muhammad Ali's grandson on the pressure of legacy and YouTube exhibitions
Sport
Conor McGregor calls Floyd Mayweather ‘embarrassing’ for punching Jake Paul
Social Media
YouTuber Nikki Phillippi criticised for putting down ‘aggressive’ family dog
News
Mafia fugitive caught after police found his cooking videos on YouTube
Next Page