He's denied claims that his pubs are facing a staff shortage because of Brexit.

Wetherspoons boss Tim Martin has backtracked on comments he made to the Daily Telegraph in which he said he favoured a more "liberal" visa scheme for EU workers. 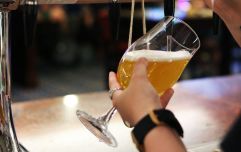 END_OF_DOCUMENT_TOKEN_TO_BE_REPLACED

In the interview, Martin said that a more flexible visa system could help ease staff shortages at pubs and restaurants that have come about as a result of the pandemic.

However, the vocal Brexiteer has now told the BBC that his comments had been taken out of context, and that he had always preferred an Australian-style visa system that treated near neighbours preferentially. He said that there was "no recruitment issue" at his pubs other than in small coastal towns.

In the interview with the Telegraph, Martin said: "The UK has a low birth rate. A reasonably liberal immigration system controlled by those we have elected, as distinct from the EU system, would be a plus for the economy and the country.

"America, Australia and Singapore have benefited for many decades from this approach. Immigration combined with democracy works."

But Martin told the BBC that these comments were out of context and that in some towns, jobs at Wetherspoons pubs were in fact oversubscribed.

There is no doubt though that the hospitality sector is facing an issue of staff shortage though after the struggles of the past 15 months.

Over the past year, Wetherspoons has reduced staff at its 871 pubs by 6,000 to almost 38,000. Meanwhile figures from the Office for National Statistics in April suggest that more than one in 10 hospitality workers in the country left the sector in the last year.

Industry body UK Hospitality has urged the government to encourage UK-based workers to join the hospitality sector, and have said that there is a shortfall of about 188,000 workers due to successive lockdowns.