Coleen and Wayne Rooney have reportedly skipped the last day of the Wagatha Christie trial where closing arguments are set to take place. 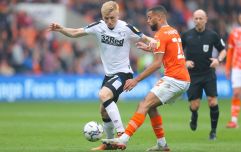 END_OF_DOCUMENT_TOKEN_TO_BE_REPLACED

The couple, according to the Mirror, was not seen arriving at the Royal Courts of Justice for the final day of the £3million case between Coleen and Rebekah Vardy that's been dubbed 'Wagatha Christie'.

The case was expected to conclude on Wednesday, but barristers were given more time to prepare closing arguments. Justice Steyn will hear the final arguments today before publishing a written judgment in the coming weeks.

The Rooneys were already set to go on holiday with their children, the Mirror reported, with a source telling the publication the couple had expected the case to be over by now when they booked the getaway.

The family were given permission from the judge to be absent, MailOnline reported.

Wagatha Christie: Jamie Vardy says 'Wayne is talking nonsense' about telling his wife to 'calm down'

END_OF_DOCUMENT_TOKEN_TO_BE_REPLACED

On Tuesday, Wayne Rooney took the stand and told about the "awkward" conversation he had to have with Jamie Vardy about his wife's behavior in 2016. Jamie later branded the comments "nonsense".

Rooney told the court that he was asked to speak to Jamie and request that his wife "calm down".

He told the court: "The England manager, Roy Hodgson and his assistant manager Gary Neville... they asked me to, as captain, would I be able to speak to Mr Vardy on issues regarding his wife.”

Rooney added: “I think we all knew that it was an awkward subject.”

He continued: “So I agreed to speak to Mr Vardy... to ask him to ask his wife to calm down.

“It was an awkward moment for me to speak to Jamie about his wife but I thought it was necessary having been asked by the England manager.”