Most people will not be aware that they can be fined for this.

We're all conscious of the fact that we shouldn't use our phones while driving. It's dangerous, causes serious accidents, is simply a very selfish and stupid thing to do and also makes you look like a very bad person. 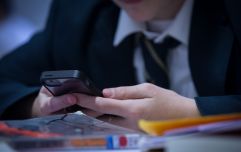 END_OF_DOCUMENT_TOKEN_TO_BE_REPLACED

What many people won't be conscious of though is the fact that you can actually be fined for using your mobile phone while sitting in the passenger seat of a car.

People can be fined as much as £200 and receive six penalty points if they are spotted using their phone while sitting in the passenger seat next to a learner driver, due to the fact that their role as instructor leaves them open to the laws which usually apply only to drivers.

The law, which prohibits instructors from touching their phones at all times during lessons, applies to professional instructors as well as family members or friends helping someone out with a lesson.

While some might consider this an inconvenience, it is worth remembering that if you're instructing someone on what to do while driving, you're also instructing them on what not to do.

And you should most definitely not use your phone.

popular
ITV News' intro to Downing Street Christmas party clip is absolutely brutal
Met police to review leaked video of Downing Street aides joking about Christmas party
Majority of people think Boris Johnson should resign, according to new poll
Nick Cannon reveals heartbreak after his 5-month-old son dies of a brain tumour
Jimmy Carr slaps down anti-vaxxer in crowd with brutal one-line dig
Eric Maxim Choupo-Moting 'still battling symptoms' after severe COVID-19 infection
Micah Richards responds to Carragher's American accent with 'C grade' Italian
You may also like
News
EE brings back roaming charges to Europe after Brexit
Tech
Which is better - Nokia's 8110 banana phone or an actual banana?
Tech
What your first mobile phone says about you
Tech
I swapped my iPhone for a Nokia 3310 and learned to live again
News
O2 customers are being urged to donate their data outage compensation to the homeless
Next Page