USA Gymnastics has agreed to a $425 million settlement for survivors of sexual abuse by doctor Larry Nassar. 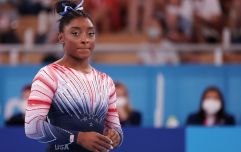 END_OF_DOCUMENT_TOKEN_TO_BE_REPLACED

During the 18-years Nassar was the US women's national gymnastics doctor, he abused more than 300 girls and young women. In 2018, Nassar was sentenced to 175 years in prison, with almost 100 survivors testifying against him.

Olympian Simone Biles was one of the numerous women to speak up.

Athletes had been in talks with the federation since 2018 when they attempted to quell survivor compensation by filing for bankruptcy protection.

"After extensive discussions, this plan has been jointly proposed by U.S.A. Gymnastics and the Committee," read a statement released to the New York Times.

"We anticipate that this plan will be confirmed later this year and greatly appreciate all parties’ efforts to get to this point.

The amount is actually much lower than the $500m Michigan State University agreed to pay, as Nassar was a longtime teacher at their school.

Speaking with the Times, survivor Rachael Denhollander, who is part of the committee that helped negotiate the new proposal, explained that it wasn’t just about financial compensation, emphasising the need to see "actual change and reform to take place in the organization".

Denhollander also reiterated that the settlement was only decided upon once USA gymnastics agreed to a set of provisions with the aim of reforming the organisation and ensuring the safety of those operating under the institution.

“The non-monetary provisions of this plan are absolutely key,” Denhollander said. “It is reform and change for the next generation. If U.S.A.G. does indeed work with survivors to see these provisions through, it would be groundbreaking.”