The actor has only visited Jamaica twice and has three children in Britain.

Actor Ace Ruele Aristotles, who has appeared in Eastenders, The Legend of Tarzan and New Blood, is facing deportation to Jamaica and potentially having his family torn apart. 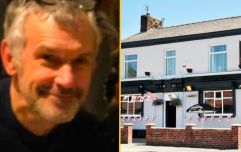 Landlord to be deported because his pub doesn't make enough money

END_OF_DOCUMENT_TOKEN_TO_BE_REPLACED

This is despite the fact that he was born in London and has only ever visited Jamaica twice.

The Independent reports that the 33-year-old was born in London to his Jamaican mother, who did not have British citizenship at the time, and was then given indefinite leave to remain. The actor says that he then fell in to the wrong crowd during his teenage years, and in 2008 was jailed for three years.

When he was released he spent five months in an immigration detention centre and successfully challenged deportation then. Five years ago, his status was changed to limited leave to remain, and his battle to stay in the UK began.

He told the Independent: "I feel like I am being punished twice for a mistake I made years ago.

"I take responsibility for my actions but, at the end of the day, I’ve served my time, have never reoffended and I’m not a threat to society."

Initially an immigration judge had ruled in his favour in his fight against the decision to downgrade his immigration status, because of his stable employment and family ties to the country. However after an appeal from the government, another judge overturned this, claiming that Aristotles had a "financial incentive" to reoffend and hadn't demonstrated family ties.

The actor said: "At the point where my Indefinite Leave to Remain was revoked in 2016, I’d been out of prison for four-and-half years, completed my license, worked with the community and was genuinely moving forward with my life."

Aristotles has managed to make a successful acting career for himself since his release from prison, and also works with the Met Police and Hackney CVS charity giving talks to young people who are at high risk of offending.

He has recently received letter from the Home Office urging him to return to Jamaica, stating that he has no right to live in the UK and being threatened with deportation. He also has to renew his Limited Leave to Remain status every 30 months, which costs £2,389 each time.

His case is further detailed in a new Panorama programme exploring the lives of young people born or raised in the UK who say that the Home Office immigration policy treats them as second-class citizens.

Aristotles has described himself as "effectively stateless - viewed as neither a citizen of the UK or Jamaica."

"I could’ve been used as an example of someone who has turned their life around after going through the criminal justice system – instead the Home Office is harassing me."

popular
Sex expert says these are the four words you should always say in bed
TikTok star sentenced to 10 years in prison over "human trafficking"
John McAfee: US anti-virus tycoon found dead in prison
Fan invades pitch with rainbow flag before Germany vs Hungary
UK Government urges children to sing bizarre 'One Britain One Nation' song on June 25
FootballJOE’s Badge Quiz – The International Edition
The 10 best places to watch the Euros in London
You may also like
News
Priti Patel accuses the left of attempting to 'monopolise' race and immigration
News
Home Office to knock on 10,000 doors a day to make sure Brits isolate
News
Men whose deportation was halted by neighbours' protest 'will still be deported'
News
Glasgow protesters successfully halt deportation of neighbours by UK Home Office
News
Protestors block immigration van from leaving after Glasgow Eid raid
Next Page