There weren't too many people backing Tyson Fury before his historic heavyweight world title win.

Not many people gave the lanky 6ft 9in British boxer a hope against the previously imperious Ukrainian champion Wladimir Klitschko.

The 39-year-old champ was unbeaten in a decade and many thought this - his record 28th heavyweight title defence - would go the same way.

But joker Fury had been telling everyone all along he was going to make Klitschko 'look like an idiot'. And he was bang on the money.

So confident was the 27-year-old fight that he would rob Klitschko of his titles that he stuck a ludicrous bet on with a wealthy relative.


The Lancashire Post report that Fury wagered £200,000 of his own money in a sportsman's bet that he would emerge victorious from the fight in Dusseldorf. 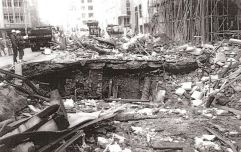 END_OF_DOCUMENT_TOKEN_TO_BE_REPLACED

Not a bad day's work considering he took another £5m just for taking part in the fight itself.