When, oh when, will the Irish Olympics controversies end?

Yet another fracas has reared its head this morning with reports that two Irish Olympic athletes were investigated during the Rio games for betting on Olympic events. 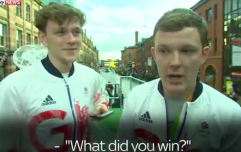 Two guys blagged their way onto the Olympic parade, but Sky News caught them out

END_OF_DOCUMENT_TOKEN_TO_BE_REPLACED

The practice of Olympians betting on Olympics events is not technically illegal, but it is prohibited by the International Olympics Committee.

According to RTÉ, it has not yet been clarified which Irish Olympians were involved in the betting - not has it been made clear which event or events they had placed bets on.

RTÉ have also reported that a statement is expected from the Olympics Council of Ireland will be released later, and will clarify what, if any, action was taken against the athletes.

OCI President Pat Hickey is currently under arrest in Brazil and being detained in Bangu maximum security prison in connection with the illegal selling of tickets to the Olympics.

Ireland won two medals at the 2016 Olympics, with Annalise Murphy winning a silver medal for her performance in the Laser Radial sailing event and the O'Donovan brothers taking silver in the men's lightweight double sculls.

However a third potential medalist, world amateur champion boxer Michael Conlan, railed against "fucking cheats" after a controversial defeat at the quarter-final stage.

popular
Outcry after woman sentenced to four years for miscarriage of 17-week-old foetus
Salt Bae's London restaurant is being flooded with negative reviews
Elon Musk is now worth more than Warren Buffet and Bill Gates combined
The FootballJOE Pub Quiz: Week 10
Fans praise Chris Evans for being honest about his mental health
Addison Rae banned from TikTok
Gary Neville slams Newcastle's handling of Steve Bruce
You may also like
Sport
Everyone is confused by this update to Mo Farah's Olympic Games profile
Sport
Team GB hockey star Maddie Hinch talks to JOE about shootouts, awards and JK Rowling
Sport
This Olympian sold his medal to help pay for a child's cancer treatment
Sport
Tinder announces Olympians with the most right swipes at Rio 2016
Sport
Watch a very angry Neymar confront a fan after winning Olympic gold for Brazil
Next Page