Sudan the rhino was 45 years old 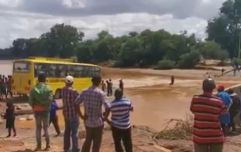 END_OF_DOCUMENT_TOKEN_TO_BE_REPLACED

Living to the human equivalent of 90 years old, Sudan was put to sleep on Monday after his condition worsened significantly.

He lived at the Ol Pejeta Conservancy in Kenya. His death leaves only two females, his daughter and granddaughter, of the subspecies alive in the world.

The remaining females Najin and Fatu have had their eggs collected, alongside the genetic material taken from Sudan on Monday, to support future conservation efforts.

Sudan gained notoriety and a viral following in 2017 when a Tinder account was opened in his name to help fund research into protecting his subspecies.

He was being treated for degenerative changes in his muscles and bones and was unable to stand in his final 24 hours because of the pain, Ol Pejeta Conservancy tweeted on Tuesday.