The pound's value may be plummeting after Brexit vote panic kicked in, but it's not the biggest change your quid is going to go through.

That shiny £1 coin in your pocket is going to look a lot different when the new design comes into circulation early next year.

The old school round coins we've grown up with all these years are being phased out and replaced by a jazzy new 12-sided one.

The Royal Mint have gone with the new dodecagon shape in a bid to thwart counterfeiters who have flooded Britain with around 45 million fake £1 coins.

One of the main new security features on the nugget is a hologram-like images which changes from a £ symbol to the number 1 from different angles.

You can see the resemblance between the new design and old old threepenny bit...

The Government wants businesses to be ready for when the new pound coin comes into use in March. 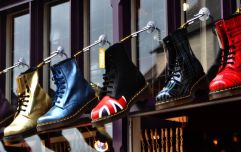 END_OF_DOCUMENT_TOKEN_TO_BE_REPLACED

Any company that handles cash or operates vending machines is being directed to the thenewpoundcoin.com website to help with the transition.

David Gauke, Chief Secretary to the Treasury, said: ‘The pound as we know it will not be round for much longer.

‘The introduction of this new £1 coin will be a highly significant event and we are working with the Royal Mint to ensure key industries are ready and to ensure a smooth transition.’

The launch of the new pound coin comes at the same time the Government is expected to trigger Article 50 and start the official countdown to Brexit.

So there's no guarantees about what your £1 will be able to buy you by then. Half a jar of Marmite maybe?