If Stormzy puts his mind to something he normally does it.

Be it chart success, Nandos orders, or even speeches at Oxford University; when Stormzy says he's going to do something, he does it.

So last month when he floated the idea of having his birthday party at Thorpe Park, people were excited.

Things got even better when Thorpe Park responded to his request to bring 200 people to the theme park...

Sounds amazing, DM us your details!

And before long, the grime artist managed to get THE ENTIRE THEME PARK for his birthday party.

All people had to do to gain entry to Stormzy's birthday party was enter a short competition.

Sodding everyone applied. It was guaranteed to be lit. 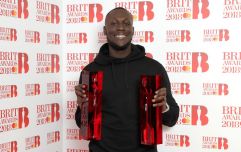 END_OF_DOCUMENT_TOKEN_TO_BE_REPLACED

What's the only thing better than a day at Thorpe Park? A day at Thorpe Park with one of the best acts in British music today. Party revellers were quick to show off the joys of #StormzyBirthdayBash, with many flocking to say thanks to the man who made it all possible.

No queues, free Nandos (Stormzy called in a few favours) and a rather impressive cake.

To be honest with you, we're rather jealous we didn't get to go.

Good on ye Stormzy, thanks for being one of the good guys and inviting a whole bunch of people to join in on your big day.

We're all rooting for you big man.