Shocking CCTV footage has been released showing terrified commuters reacting to a passenger waving around a machete on the tube in central London in an attack that left one victim with life-changing injuries.

END_OF_DOCUMENT_TOKEN_TO_BE_REPLACED

The video was released Friday by British Transport Police (BTP) after Ricky Morgan was found guilty of attempted murder for the attack, which took place on a Jubilee line train, near Greene Park.

The incident, on a Friday night, shortly before 7pm on 9 July 2021, left his victim with life-changing injuries. In a statement the victim, James Porritt, said the attack had "changed my family, my girlfriend's, and my life forever".

On 9 July 2021, Morgan walked through a packed tube train near Green Park and launched the unprovoked attack.

In a statement, his victim - who was left with life changing injuries - said it had "changed my family, my girlfriend’s and my life forever." pic.twitter.com/A49ZaCPzK2

END_OF_DOCUMENT_TOKEN_TO_BE_REPLACED

The 34-year-old hacked the businessman, who was a total stranger, leaving him with part of his hand hanging off that he had to hold together himself, Metro reported. Porritt managed to escape to another carriage.

Other passengers fled down the train, with some falling to the ground in the rush to get away from Morgan.

Morgan, of no fixed abode, told police he had targeted his victim specifically - and did not intend to injure other members of the public - but the pair did not know each other.

"From witness accounts, a reviewing of the CCTV footage and Morgan’s own account, it became clear that Morgan targeted the man specifically, and did not have an intention to attack or injure other members of the public," BTS said in a statement Friday.

Ricky Morgan has been convicted of attempted murder for the attack 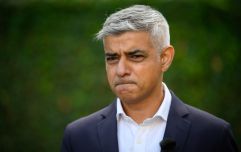 END_OF_DOCUMENT_TOKEN_TO_BE_REPLACED

Morgan was charged with attempted murder and two counts of possessing an offensive weapon in a public place and was convicted at the Old Bailey. He will be sentenced in the coming weeks.

"The two men had never spoken, never met, and had never crossed paths until that day," he said.

"Clearly, it was terrifying situation for the victim, he was able to escape but this attack and the injuries he suffered continues to have a substantial impact on his life."

popular
R Kelly due to be sentenced today, with prosecutors calling for 25 years
Black box prepped for doomsday as creators warn we 'are now being recorded'
Man sends pic of him receiving oral sex to all passengers on plane - gets arrested
Dramatic video shows the moment dad attacks 3-year-old son's suspected murderer in court
Subway worker shot dead for putting too much mayo on sandwich
Jasmine Burkitt death: BBC reality TV star dies aged 28
Lewis Hamilton slams 'archaic mindsets' following Nelson Piquet's racially abusive remarks
You may also like
Entertainment
Sadiq Khan takes swipe at Boris Johnson after being booed by angry crowd over tube strikes
News
Sadiq Khan says not wearing a face mask on Tube should be criminal offence
Life
Which is the best way to commute - Underground Tube or fish tube?
News
London tube workers to stage three day strike over FA Cup final weekend
News
BBC weatherman discovers it's over 100ºF on the tube and it's going to get even hotter
Next Page