Seven people charged with homicide in death of Diego Maradona

Seven people have been charged with homicide of the death of the Argentinian football player, Diego Maradona. 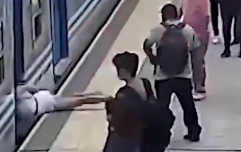 END_OF_DOCUMENT_TOKEN_TO_BE_REPLACED

His family had suspected something was not quite right surrounding the footballer's death following his surgery, which prompted an investigation into the situation.

Police in Argentina raided the house and clinic of Dr Leopoldo Luque, the surgeon who performed surgery on Maradona, in the days after the player's death. Dr Luque denied any wrongdoing following Maradona's death.

A medical board that was appointed to investigate the 60-year-old's death found that his medical team acted in an "inappropriate, deficient and reckless manner" before his death, according to a report seen by Reuters. 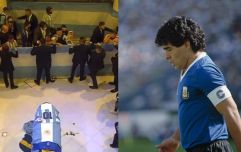 END_OF_DOCUMENT_TOKEN_TO_BE_REPLACED

Now, prosecutors Argentina have said that seven people including Dr Luque, have been charged with "simple homicide with eventual intent," ESPN reported.

As reported by ESPN, two nurses, a doctor, a psychologist and a nurse coordinator have also been charged.

Audio recordings of private discussions between doctors and people from the footballing icon's entourage have since been leaked to the press, according to ESPN. The recordings have indicated that Maradona was not being properly cared for prior to his death last year.

popular
Tourist dies after losing arm and leg in shark attack at popular resort
Jordan Peterson suspended from Twitter over Elliot Page comment - says he won't apologise
Stranger Things: Spotify will choose which song would save you from Vecna
Adele fans have 'mad respect' for her after she stopped her Hyde Park gig to help someone in distress
Son uninvites parents from wedding because 'they're not good enough' - so they sell his house
Threesome sees 60-person brawl break out on cruise ship, says passenger
The JOE Friday Pub Quiz: Week 301
You may also like
Sport
Medical staff to face trial over Diego Maradona death
Sport
Diego Maradona's grandson presents Finalissima trophy ahead of Italy vs Argentina game
Sport
Diego Maradona 'Hand of God' shirt sells for millions at auction
Sport
Auction house deny Diego Maradona family claims about 'fake' shirt
Sport
Diego Maradona's family claim wrong shirt is being auctioned for €4m
Next Page