Matt Hancock is expected to place millions more Brits into Tier 4 tomorrow, but scientists are calling for him to go further to Tier 5

Tomorrow afternoon in the House of Commons Matt Hancock will announce which other areas will follow the lead of London and all of the South East and enter Tier 4 restrictions.

There is, however, increasing clamour from the government's top scientists that these measures simply do not go far enough and that additional 'Tier 5' restrictions, like the closure of schools, are required.

Yesterday it was reported that SAGE advised the government as long ago as last week to take action, introduce stricter controls and delay the return of students and this morning one of the group's leading scientific minds, Professor Andrew Hayward, broke cover to publicly call for action.

Hayward told BBC Radio 4's Today programme: "I think we are entering a very dangerous new phase of the pandemic and we're going to need decisive, early, national action to prevent a catastrophe in January and February.

"A 50 per cent increase in transmissibility means that the previous levels of restrictions that worked before won't work now, and so Tier 4 restrictions are likely to be necessary or even higher than that.

"I think we’re really looking at a situation where we're moving into near-lockdown, but we've got to learn the lessons from the first lockdown."

"We've had control measures that were previously controlling the old variant are not enough for this variant.

"And so if we want to control the new variant we are going to need much tighter restrictions. 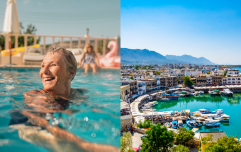 Cyprus to allow vaccinated Brits on holiday from May

END_OF_DOCUMENT_TOKEN_TO_BE_REPLACED

"We need to be more or less in a similar sort of messages of stay at home unless you really, really have to, so there's that combined with incentivisation of testing, incentivisation of isolation – those sorts of things that will carry us through the next few months while we get as many people as possible vaccinated."

It's reported that, as a minimum, Downing Street could put two thirds of England into Tier 4 restrictions but the scientific consensus appears to be that a new Tier 5 will be necessary to control the pandemic, after new more transmissible strains were discovered in the population.

The UK has now broken its previous records for number of patients in hospital with coronavirus, as well as confirmed new cases, both set during the pandemic's initial peak in April.

The majority of hospital admissions are in London, nearly 5,000 of them, and the total number of people being treated on wards in England is now 20,426, compared to the 18,974 recorded on April 12.

Dr Yvonne Doyle, Public Health England medical director, said: "This very high level of infection is of growing concern at a time when our hospitals are at their most vulnerable, with new admissions rising in many regions."

The President of British Infection Association tweeted: "Back on the wards today. Staggering amount of Covid.

"Not looking forward to next two weeks. Please follow the rules this new years eve."

Back on the wards today. Staggering amount of covid. Striking difference from last time - large family outbreaks with teenagers/young adults the focus. Multiple family members being admitted. Not looking forward to next two weeks.
Please follow the rules this new years eve.

About 24 million people, half of England's population, are currently living under Tier 4 restrictions.

The government does not deny that Tier 5 restrictions will be introduced but The Telegraph reports the current plan is only to expand Tier 4 areas.

The chief executive of the NHS, Sir Simon Stevens,  said: "Now again we are back in the eye of the storm with a second wave of coronavirus sweeping Europe and, indeed, this country.

"Many of us have lost family, friends, colleagues and - at a time of year when we would normally be celebrating - a lot of people are understandably feeling anxious, frustrated and tired."

"We think that by late spring with vaccine supplies continuing to come on stream we will have been able to offer all vulnerable people across this country COVID vaccination.

"That perhaps provides the biggest chink of hope for the year ahead."

popular
#ResignBorisJohnson trends on Twitter after he was found to have misled parliament
The JOE Pub Quiz: Week 233
QUIZ: Can you name England's XI from every knockout loss since 2002?
Imagining a North vs South Premier League All-Star match
YouTubers trick royal experts into commenting on Harry & Meghan interview that hasn't aired
QUIZ: Identify the clubs these Football Italia legends played for - #1
Crazy scenes outside Ibrox as Rangers fans welcome Steven Gerrard ahead of huge game
You may also like
Food
Almost 400 Wetherspoons pubs will reopen on April 12
News
Furlough scheme set to be extended until September
News
It's 'unrealistic and premature' to think the pandemic will end this year, says WHO
Entertainment
Chris Hemsworth criticised for attending maskless party on social media
News
Police no longer breaking up outdoor groups as they slam 'unmanageable' guidelines
Next Page