You have been warned

Pubs across the country will be open from 7am on Saturday May 19 to celebrate the Royal Wedding which, coincidentally, falls on the same day as the FA Cup Final. 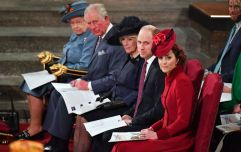 END_OF_DOCUMENT_TOKEN_TO_BE_REPLACED

Licensing laws will also be relaxed at the end of the day, permitting service until 1am.

This means landlords of pubs, bars and other licensed premises won’t have to go through the necessary procedures to seek permission from local authorities to serve after 11pm.

Extra time for drinkers will be granted for Friday and then again on Saturday.

Some estimates indicate the weekend could generate £100 million of additional revenue for the economy.

"We predict it will be the busiest day of the year."

John Perry, landlord of the Queen Charlotte in Windsor, said: "We’ve got people coming from as far away as Australia and America.

"We’ll be switching over to the Cup Final at 5pm. It’s going to be full on, all day."

They're not the only ones having a busy day, Prince William is involved in both the Royal Wedding (obviously) and the FA Cup Final, where he is due to present the trophy as President of the Football Association.

He is of course also his brother's best man.

The wedding is at midday and kick-off at Wembley is at 5:15pm, Godspeed, Sir William.