A professional volleyball player has been left with over €700,000 (£592K) worth of debt after falsely believing he was dating a Brazilian supermodel - for over 15 years.

END_OF_DOCUMENT_TOKEN_TO_BE_REPLACED

Roberto Caazzaniga thought he was seeing a woman named 'Maya', a Brazilian model who he had been introduced to over the phone many years ago by a mutual friend named Manuela.

Photos of supermodel Alessandra Ambrosio - most famous for being a Victoria's Secret 'Angel' from 2004-2017- had been used as part of the catfish rouse.

According to local media reports, despite never meeting face-to-face, Cazzaniga claimed he was engaged to the woman who he had been sending lavish gits and financial aid, including a brand new Alfa Romeo Mino and €700,000 to help with medical expenses associated with a heart condition.

Cazzaniga, from Milan, eventually shared his story with Italian authorities after being pressured by friends and teammates to do some due diligence on his relationship.

Authorities revealed he was the victim of an elaborate scam.

Cazzaniga went public with his story this week, revealing on Italian TV that he had been catfished. A GoFundMe page has since been set up to raise money for him and almost €10,000 had been raised by lunchtime Friday. 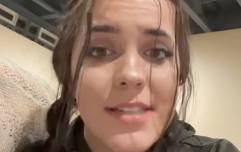 END_OF_DOCUMENT_TOKEN_TO_BE_REPLACED

"I have so many debts, it's not easy 'waking up from a coma,'" the volleyball player said.

Cazzaniga's brother Danilo has since told of how his brother was sucked in, saying he had come across his brother crying in the dark.

"He told me that he had fallen in love with a beautiful woman, but she was currently in the ICU being prepped to undergo a cardiac operation."

According to the local press Manuela allegedly organised the scam and introduced Cazzaniga to the scammer, who is thought to be a resident of Sardinia. The alleged scammed has been identified by local media, but has denied being involved, saying she is merely a friend of 'Maya'.

Italian authorities are believed to be continuing with their investigations.

popular
Man dies three days 'after GP sent him home and threatened to strike him from surgery list'
Marcus Rashford responds after being pictured with disgraced rapper Wiley
Schoolboy loses both nipples after classroom dare involving two cans of Lynx
Outrage after Sadio Mané allowed to play on for 10 minutes after being knocked out
Driver arrested on suspicion of murder after knifeman 'hit with car while stabbing woman'
Jesse Lingard angered by 'lack of respect' shown by Man United after loan move delayed
Peter Dinklage calls Snow White and Seven Dwarfs remake 'f*cking backwards'
You may also like
Sex
Owning an Android is officially the UK's biggest turn off for 2021
Life
Woman lets her husband 'play' with sister as well as her mum
Life
Straight woman and gay man make marriage work with weekly sex feedback sessions
Sex
Sex expert reveals most common mistakes couples make in bed
Life
The best time of the day to have sex, according to science
Next Page