END_OF_DOCUMENT_TOKEN_TO_BE_REPLACED

Sepuloni was on a live interview with Radio Samoa when her son swanned in holding a deformed carrot he found amongst the shopping.

“That moment when you’re doing a LIVE interview via Zoom & your son walks into the room shouting & holding a deformed carrot shaped like a male body part,” Sepuloni tweeted with a video of the incident. “Yes, we were almost wrestling over a carrot on camera, and yes, I’m laughing about it now but wasn’t at the time!”

That moment when you’re doing a LIVE interview via Zoom & your son walks into the room shouting & holding a deformed carrot shaped like a male body part. 🙄🤦🏽‍♀️ Yes, we were almost wrestling over a carrot on camera, and yes, I’m laughing about it now but wasn’t at the time! 🥴 pic.twitter.com/oUbcpt8tSu

END_OF_DOCUMENT_TOKEN_TO_BE_REPLACED

"A big up’s to all our parents working from home and parenting at the same time — I see you!" she continued.

"*Note to self: I will never buy the odd-shaped carrot pack again."

Sepuloni is one of many parents who have had their work meetings interrupted by kids being kids.

Arguably the most iconic was Professor Robert Kelly when he was being interviewed live on BBC News about South Korea back in the May of 207.

First, the little girl jaunts in, bouncing as she walks behind her father who is trying to talk about relations between North and South Korea. Moments later another child enters the room, this time in a bouncer. 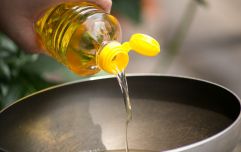 END_OF_DOCUMENT_TOKEN_TO_BE_REPLACED

Finally, the children's mother bursts into the room with a look of sheer panic on her face as she tries to wrestle the kids out of the camera shot.

Similarly, in another trainwreck BBC interview moment, Dr Clare Wenham is discussing Public Health England in July of last year, when her daughter decides that her interior design work is more important. Wenham is visibly embarrassed but luckily her daughter is happy to engage with the presenter who offers her his own decorating opinion.

popular
The JOE Friday Pub Quiz: Week 296
Ricky Gervais finally says what we're all thinking about the Johnny Depp Amber Heard case
Japanese man spends £12,480 to look like a border collie - and it kind of works
Rio Ferdinand and John Terry in Twitter war after controversial 'top 5' pick
Amber Heard's lawyers will not call Johnny Depp back to the stand amid suggestions he is 'uncontrollable as a witness'
Husband of teacher killed in Texas school shooting dies after suffering heart attack
New Time Traveller's Wife series airs 'incestuous' oral sex scene that has left everyone divided
You may also like
Entertainment
Johnny Depp says he cooked waffles for his fans as he arrives at courthouse
Science
Here's how often you should feed your dog - the results even surprised scientists
Life
McDonald's new UK menu revealed - six items added from today
News
This woman has broken the world record for most nuggets eaten in 60 seconds
News
Pub sparks debate after renaming ploughman's lunch with genderless term
Next Page