Panic-buying motorists queued for three hours on Monday to get into a petrol station - that was closed. 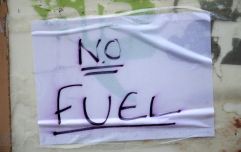 Fury on the forecourts - the worst things we saw this week

END_OF_DOCUMENT_TOKEN_TO_BE_REPLACED

South Derbyshire police were confronted by 100 drivers trying to get into an unmanned Gulf petrol station - closed due to vandals attacking the pumps - after being called to the remote village of Burnaston.

The forces' Safer Neighbourhood Team had been called following reports of queues of traffic in the area.

“Arriving at the unmanned petrol station on the extremely fast-flowing A516 roadway, officers observed long queues of cars attempting to enter the petrol station," the force wrote.

“Bizarrely, it soon became clear that the drivers had been queuing at a petrol station for several hours despite the fact that the garage was not open to the public and was unable to serve fuel following unknown persons who had caused damage to some of the petrol and diesel pumps.”

Police then attempted to explain the situation to drivers who had been sitting in their cars for “over three hours”.

It didn't go down well: “With regret, officers, who were stood outside in pouring rain directing traffic, were subjected to abuse and a series of inexplicable excuses of why they needed to enter a closed garage that was unable to sell fuel." 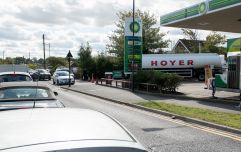 END_OF_DOCUMENT_TOKEN_TO_BE_REPLACED

An investigation is underway to locate two men in a white van who made threats to an officer at the scene after they were asked to leave the petrol station, the force said.

One irate driver told officers he was so desperate to refill his car, he had been driving for over three hours looking for fuel “and was furious”.

“When asked how much fuel he’d used looking for petrol he finally appeared to grasp the lack of solid ground his argument stood upon," the force wrote on Facebook.

popular
Dr. Dre shares unbelievable video of Eminem's skills to prove no rapper could beat him
'He completely satisfies me' - wife of disabled man hits back at trolls mocking sex life
'Hey kiddo! This is your uncle ' - creepy moment OnlyFans star's relative finds her page
Man tracked down and killed son's paedophile abuser live on TV
The JOE Friday Pub Quiz: Week 279
A definitive ranking of every swear word from worst to best
Former army sergeant who became porn star explains why she made career move
You may also like
News
Up to 90% of petrol stations have run dry
News
Kobe Bryant and daughter Gianna immortalised in statue at helicopter crash site
Entertainment
Spotify to pull Neil Young music after he slammed Joe Rogan podcast
News
'Time traveller from 2714' reveals when the zombie apocalypse will take place and how it begins
News
Why dogs are getting sick and symptoms owners should look out for
Next Page