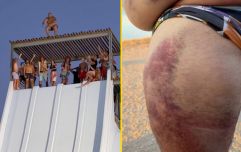 END_OF_DOCUMENT_TOKEN_TO_BE_REPLACED

His exit comes following his comments on Meghan Markle after her interview alongside Prince Harry with Oprah Winfrey.

END_OF_DOCUMENT_TOKEN_TO_BE_REPLACED

The past few days have been a whirlwind of news regarding Prince Harry, Meghan Markle and their interview with Oprah Winfrey.

In the interview Harry and Meghan levelled some incredibly serious allegations against the royal family as an institution - that conversations were had about how dark the skin of their baby would be and the denial of mental health support to the Duchess when she was experiencing suicidal thoughts.

In response, Morgan said he did not "believe a word she says", which drew widespread criticism from every angle, including from one of his co-hosts, Alex Beresford, whose takedown of Piers' conduct prompted him to storm out of the studio like a giant baby.

END_OF_DOCUMENT_TOKEN_TO_BE_REPLACED

Mental health charity, Mind, issued a statement condemning his comments, while 41,000 complaints were sent to Ofcom.

The broadcast regulator then launched an investigation into the comments, but Morgan took the decision to walk away from GMB just hours later.

Reports have already circulated linking Morgan to his next big TV gig. In December, he was touted as a potential host of Rupert Murdoch's forthcoming TV channel News UK TV.