Petrol and diesel hit new high, most expensive for three and a half years

Government data shows that the average forecourt price for petrol is £1.24 and £1.28 for diesel - the highest price since November 2014, according to the Press Association.

The cost of petrol and diesel has risen by around four pence per litre in the last four weeks. 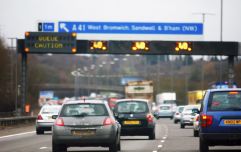 END_OF_DOCUMENT_TOKEN_TO_BE_REPLACED

AA president Edmund King said: "AA research has shown that nearly two in every five drivers are already cutting back on car use, non-fuel spending or both.

"But what is even more disturbing are predictions of oil above 100 US dollars by banks and investment funds pouring money into the market."

The AA said an "astonishing gap" between supermarket prices and oil company stations was becoming apparent, with the likes of Tesco and Morrisons being cheaper than conventional petrols stations counterparts.

popular
Genius lettuce hack 'puts people to sleep in seconds' - and people swear by it
Billie Eilish confesses to using body double for Coachella festival set
East London nightclub deaths: At least 22 people found dead in South African 'tavern'
Paratroopers filmed in orgy at Merville Barracks with one serviceman saluting colleagues while having sex
Old George Carlin routine resurfaces after US abortion ruling
'Dinosaur lady' wins internet with baffling Question Time remark on rail strikes
Brits with £20 and £50 notes have been given a 100 day warning
You may also like
News
Fury on the forecourts - the worst things we saw this week
News
Nigel Farage involved in crash with van while filling car with petrol
News
Where can you get petrol near you and how to use Google to check for queues
Life
Petrol station chaos worsened by drivers filling up with wrong fuel
News
The petrol station saving its remaining fuel for emergency services and keyworkers
Next Page