The couple were named as Nicholas Smith and his wife Hilary

An elderly couple whose bodies were found by police at their bungalow may have gone undiscovered for 18 months.

END_OF_DOCUMENT_TOKEN_TO_BE_REPLACED

The bodies of the man and a woman were found in in Cloneen, Co Tipperary, at 4pm on 20 June in separate rooms.

According to the Irish Times the bodies were retired cruise liner captain Nicholas Smith, 82, and his wife Hilary,79.

The newspaper said that police believe the couple died during the covid lockdown in late 2020 because of rotting items found in their fridge. 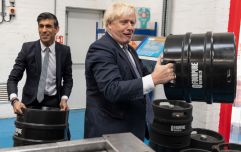 Boris Johnson and Rishi Sunak to be fined over Partygate

END_OF_DOCUMENT_TOKEN_TO_BE_REPLACED

Fine Gael councillor Mark Fitzgerald told the Times “the news of the death made it a very sad day for the area,” which he described as, “a close knit community.”

Post-mortem examinations took place on Tuesday for nine hours, but the results were inconclusive.

popular
Groom shoots friend dead by mistake after firing shot in celebration at his wedding
The JOE Friday Pub Quiz: Week 300 - the Triple Century
'Dinosaur lady' wins internet with baffling Question Time remark on rail strikes
Seven awful films rated higher than Pogba’s “Pogmentary” on IMDB
Johnny Depp's lawyer Camille Vasquez annoys fans amid rumours she may defend David Dobrik
Russian missile does a U-turn during malfunction and smashes into troops who fired it
Swimmer who dramatically fainted during artistic routine banned from World Championships final
You may also like
News
Boris compares himself to Thatcher as he refuses to rule out another lockdown
News
Lockdown drones in China tell citizens to 'curb your soul's desire for freedom'
News
Keir Starmer cleared by police over lockdown beer snap
News
Piers Morgan sums up why 'Partygate' is so damaging in two minutes
News
Wearing a face mask makes you more attractive, according to study
Next Page