Pen Farthing given go-ahead to evacuate Afghanistan with rescue animals

The ex-marine Paul 'Pen' Farthing has secured himself a spot on a plane, as well as his staff and some 200 rescued animals

After weeks of campaigning and insistence that he would not leave Afghanistan without both his staff and the animals rescued by his charity, Nowzad, Paul 'Pen' Farthing has been cleared to evacuate with his team and precious cargo as soon as possible.

The former West Country-based Royal Marine was given the go-ahead overnight by the UK's Defence Secretary Ben Wallace, who said on Twitter that he and the Ministry of Defence will "seek a slot for his plane".

If he does not have his animals with him he and his staff can board an RAF flight. I have been consistent all along, ensuring those most at risk are processed first and that the limiting factor has been flow THROUGH to airside NOT airplane capacity. @DefenceHQ

He reiterated that those "most at risk" would be processed first, having told Good Morning Britain that he could not put "animals before people", adding that "No one has the right to jump the queue".

Farthing had been campaigning to speed things along after he accused the MoD of delaying his evacuation plans. The 52-year-old from Devon had chartered a $500,000 private plane to land at Kabul Airport in an emergency effort to get him and his Nowzad charity workers out of the country, along with around 200 cats and dogs.

Defence secretary Ben Wallace has confirmed that if Pen Farthing arrives at the airport with his animals, officials would "seek a slot for his plane".

The former Royal Marine is trying to leave Afghanistan with 68 staff and 200 cats & dogs from a shelter.https://t.co/EBq3jjLOFu pic.twitter.com/iyKEAJEN1c 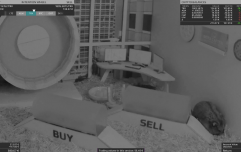 END_OF_DOCUMENT_TOKEN_TO_BE_REPLACED

As the situation in Afghanistan continues to unfold and uncertainty looms over what steps the Taliban will take next - their August 31st evacuation ultimatum already sounding out a warning - this is one piece of positive news.

Meanwhile, the US managed to airlift 11,000 people in less than 36 hours last week - 823 Afghans on one plane in one instance - and the UK is aiming to double their evacuations numbers to 12,000 this week.

President Biden has intimated that America is on track to pull out all of its evacuees and military personnel, while Wallace said that any extension to the deadline is unlikely.

popular
Paul Scholes delivers sobering Man Utd warning after stunning comeback
Ricky Gervais wants to live to see young generation 'cancelled' by the next one
Police investigating viral video of child being 'forced' to have ears pierced
Here we go again - the government says book your Xmas party. What's 'Plan B'?
Gordon Ramsay's daughter Tilly calls out radio host for 'fat shaming' her live on air
Passengers who allegedly filmed rape of woman on train unlikely to be charged
Matt Lucas hits back at outrage over 'offensive' Bake Off German accent
You may also like
Life
Vegan cries while eating fish for the first time in two years
News
A warning sign of a mass extinction event is on the rise, scientists warn
News
Faroe Islands to review dolphin hunt after global outrage
Life
Fans save dangling cat at American football game
News
Geronimo the alpaca did not have TB according to post mortem, owner claims
Next Page