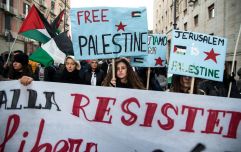 END_OF_DOCUMENT_TOKEN_TO_BE_REPLACED

This year's song contest was hosted by Israel, after Netta Barzilai won in 2018, leading to calls for a boycott.

Of the flags, Regev said: "It was an error. Politics and a cultural event should not be mixed, with all due respect to Madonna."

Regev was critical of Israeli state broadcaster Kan for allowing the flags to be broadcast.

Palestinian and Israeli flags both appeared during Madonna's performance, on the backs of two of her dancers, with Quavo.

Bondage punks Hatari were critical of the entire competition, which they described as "built on lies," and the state of Israel itself.

Every time the Icelandic group were awarded points, the cameras would cut to them and show the group waving Palestinian flags.

END_OF_DOCUMENT_TOKEN_TO_BE_REPLACED

The event's organiser, the European Broadcasting Union, condemned both displays and, in reference to Madonna’s dancers, said: "This element of the performance was not part of the rehearsals. The Eurovision song contest is a non-political event and Madonna had been made aware of this."

Iceland are expected to be punished for Hatari's display.

After the protest, Eurovision released a statement confirming that the consequences would be discussed.

"In the live broadcast of the Eurovision Song Contest Grand Final, Hatari, the Icelandic act, briefly displayed small Palestinian banners whilst sat in the Green Room," read the statement.

"The Eurovision Song Contest is a non-political event and this directly contradicts the Contest rules. The banners were quickly removed and the consequences of this action will be discussed by the Reference Group (the Contest's executive board) after the Contest."