The asteroids will not come close enough for pictures

Over the next few months, numerous asteroids the size of the world great wonders will pass by Earth. A rock that passed us on Friday, with a 525 feet diameter, was reportedly the size of the Great Pyramid of Giza.

If you thought that was big, then you might want to stop reading now, as asteroid 2004 UE comes in with a diameter of 1,246 feet.

But don't fear, as this space rock will still be 2.6 million miles away from Earth- phew!

Despite the incredible distance between us and the rocks soaring through space, NASA still labels them as Near Earth Objects, or NEO's if you want to get really scientific.

"Comets and asteroids that have been nudged by the gravitational attraction of nearby planets into orbits that allow them to enter the Earth's neighbourhood," NASA states. 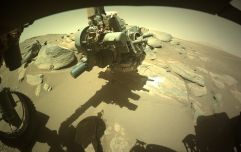 END_OF_DOCUMENT_TOKEN_TO_BE_REPLACED

NEO's fit into two categories, one being "water ice with embedded dust particles," which are formed around planets further away from the sun, and rocky formations that are formed "between Mars and Jupiter". As these were formed 4.6 billion years ago, scientists believe they hold vital information about the beginning of the universe.

the end of November, the biggest of which, 2004 UE, had a diameter of 1,2046 feet. At 2.1 million miles, asteroid 1996 VB3, will pass closest to Earth on October 20. Scientists say that, although very close by interstellar standards, non of the asteroids .. pic.twitter.com/i4auz9Qhmc

"If we wish to know the composition of the primordial mixture from which the planets formed, then we must determine the chemical constituents of the leftover debris from this formation process - the comets and asteroids," the Center for Near Earth Object Studies said.

"No one should be overly concerned about an Earth impact of an asteroid or comet. The threat to any one person from auto accidents, disease, other natural disasters and a variety of other problems is much higher than the threat from NEOs," NASA said.