Hamza Choudhury and Wesley Fofana will not face disciplinary action after celebrating with a Palestinian flag after their side's FA Cup final victory over Chelsea. 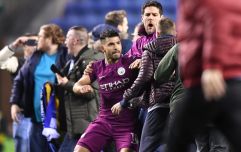 END_OF_DOCUMENT_TOKEN_TO_BE_REPLACED

The two players held either side of the flag during a lap of honour in front of fans after the final whistle on Saturday, with Choudhury then draping the flag over his shoulders when he collected his medal and his side lifted the trophy.

However, the Independent reports that the FA does not investigate the general use of flags on the field of play, meaning that the two players are set to avoid any disciplinary action.

The gesture came after days of violence between Palestine and Israel that has seen more than 140 deaths. Some interpreted Choudhury and Fofana's celebrations with the flag as a political gesture.

Hamza Choudhury and Wesley Fofana with the Palestine flag. Love that pic.twitter.com/N6OejNhRTf

20-year-old Fofana started the final against Chelsea, and has been one of Leicester's stars of the season, putting in another big performance at Wembley, as the Foxes one their first ever FA Cup title having lost four previous finals.

23-year-old Choudhury, who has come through the Leicester City's academy, came on for the final minutes.

On the same day as the final, thousands attended protests in London and across the country in solidarity with the people of Palestine.