The bods at Nike have treated Andrea Pirlo to a new custom pair of football boots.

And much like the man himself, the new boots are simple, understated and effortlessly cool.

Does that mean the new boots boast one of those tilted soles to help you walk better? Not quite; instead the Tiempos look like a special treasure unearthed from a quality wine cellar.

According to the Nike press release, the Tiempo Pirlo feature 'premium Alegria leather in a Merlot colourway inspired by the juice of the grape.' 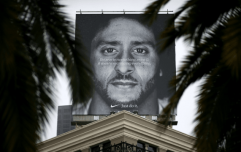 END_OF_DOCUMENT_TOKEN_TO_BE_REPLACED

In an added touch, the boots come with four gold stars on the back, one for each of Italy's World Cup wins.

The boots come packaged in a polka dot shoebox. A line reading 'Aged Since 94' features on both the box, and in a genuine cork sockliner.

Nike really want you to feel like you're opening a vintage bottle of wine with these boots it seems.

The limited edition Tiempo Pirlo will be available September 19 for "let's not talk about that" money via the Nike Football App and nike.com.