I mean, this has got to be some people's worst nightmare...

A nightclub in Colchester is going to let clubbers hire out GoPros and harnesses so that people can record the entirety of their night and remember what exactly it was they got up to. 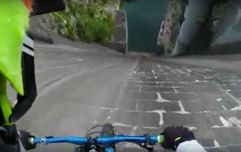 END_OF_DOCUMENT_TOKEN_TO_BE_REPLACED

ATIK will let customers hire out the cameras, and for an additional fee will even edit the footage into your own personal highlight package, so that you can remember every drink spilt over you, how long you stood at the bar waiting for a drink, and just how grim the toilets were.

Posting on Facebook, the club wrote: "Do you or your friends suffer from memory loss after a night out? We got you!

"This summer you will be able to hire a GoPro and harness to record the whole of your night out, for an additional fee we will edit together your highlights! GoPro or Go Home!"

Whilst many will not be able to think of much worse than a continuous recording of themselves pissed and yelling out the words to Mr Brightside or Bonkers, it seems like a few others quite like the idea.

Responding to the post, one person wrote: "I'd live for watching this back."

Another commented: "The moment I've been waiting for."

And many more tagged friends and club companions with comments about being able to actually remember nights out now.

Others had more sense then, and realised how mad it would be to want to watch yourself back after a night out.

One person said: "Watching that back would be worse than the actual beer fear."

After all, as the saying goes, what you don't know can't hurt you...

popular
Pedophile chugs liquid and dies in court shortly after he's convicted
M.U.S.T release statement after embarrassing Brentford defeat
Dana White claims UFC fans who illegally streamed fights have been 'f****** smashed'
Lisa Kudrow hits back at fans complaining about lack of diversity in Friends
Landlord faces £40k fine after tenant puts swimming pool on roof of flats
Chilling moment man with knife and balaclava is captured wandering around family's living room
James May 'hospitalised after crashing into wall at 75mph filming new show'
You may also like
Life
VIDEO: Kitten found frozen in the snow is miraculously saved by family
Sport
We see far, far too much of Miguel Angel Jimenez in this Go Pro footage (Video)
Life
Here's what happens when a seagull steals your GoPro camera (Video)
Entertainment
Watch the new Foals video for Mountain At My Gates, filmed entirely on GoPro
Sport
Stunning footage of Allison Stokke's pole vaulting 'rush'
Next Page